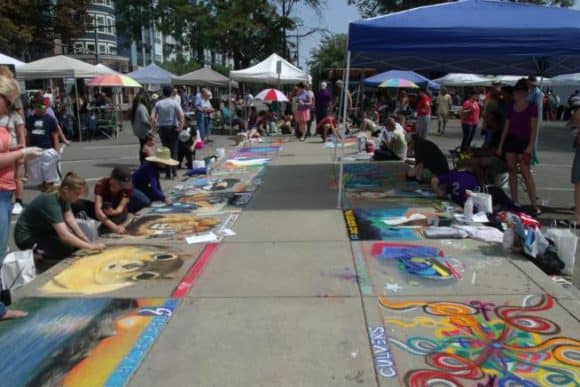 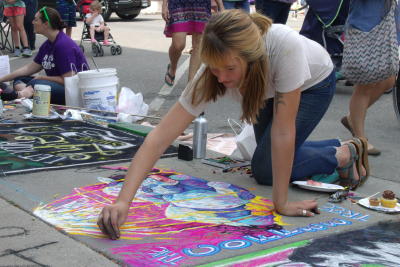 Hannah Circenis, of Fort Collins, works on her square during Pastels on Fifth Saturday, Sept. 9, 2017, in Loveland. The annual fundraiser for Alternatives to Violence takes place at the corner of Fifth Street and Lincoln Avenue (Michelle Vendegna/Reporter-Herald Staff).

More than 100 artists spent Saturday at Pastels on Fifth on their hands and knees creating works of art on the sidewalks on Fifth Street between Lincoln and Cleveland avenues to support Alternative to Violence.

“It’s fun to see this many people come together for art and a good cause,” said Hannah Circenis of Fort Collins. Circenis grew up in Loveland and just finished her art degree at Colorado State University. She has been participating in the event since almost the beginning. She works mostly in oil paintings, but Circenis likes the chance to switch it up with chalk.

“Blending it is hard on the concrete. It’s just different,” she said of the pastels.  Circenis was unsure of what she was going to create Saturday morning, but her sister, who was working across the street, had the idea of the holy calf.

“I like bright colors a lot,” she said of the color scheme. It provided contrast from the concrete.

Artist Jade Windell has a partner this year, his 6-year-old daughter Amelia.

“Since she could talk, she’s been asking to be a part of it,” said Windell. He always promised she could do it when she got a little older and Amelia held him to it.

Posted in Pastels in the Media