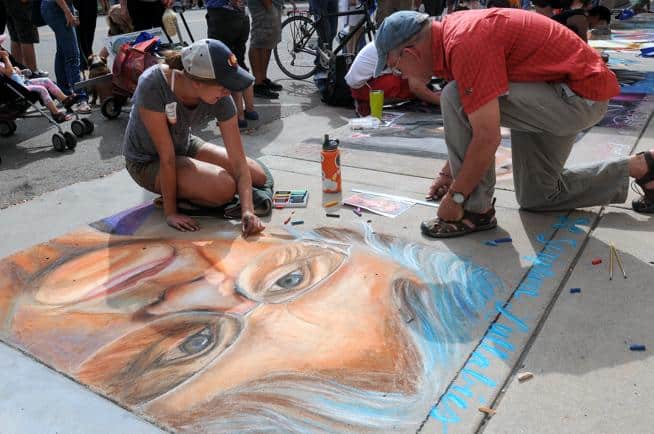 Mark Silvers, a high school art teacher at Resurrection Christian School in Loveland, provides a little coaching to his former student, Amarie Stocker, as she works to complete her portrait on the sidewalk on East Fifth Street in downtown Loveland during Pastels on 5th on Saturday. Stocker is now a senior studying art at the University of Northern Colorado in Greeley. (Craig Young / Loveland Reporter-Herald)

The Pastels on 5th fundraising event for Alternatives to Violence brought artists to downtown Loveland on Saturday, where they worked on their hands and knees to create chalk art and raise money for the nonprofit that helps victims of domestic violence.

The event also included live music, food and booths, and drew a large crowd of spectators.

Although the event wrapped up Saturday, the chalk art will remain on the sidewalks along Fifth Street between Lincoln and Cleveland avenues for some time. 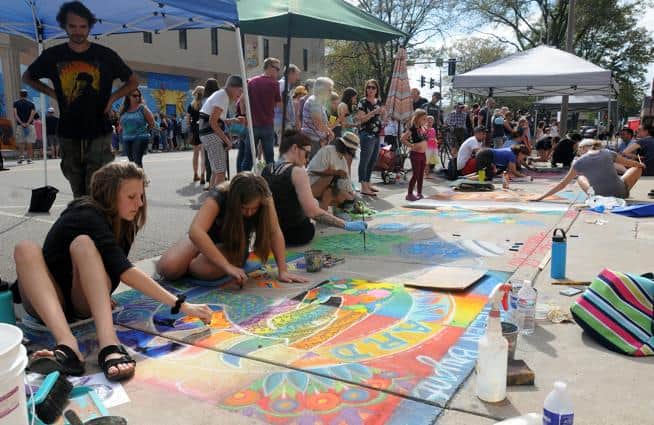 Sam Beatty, left, an eighth-grader at Kinard Middle School in Fort Collins, works on a chalk version of the school’s logo as classmate Anna Morrill crafts her section of the piece. Teacher Kari Mohar said the girls are part of a service art class at the school. Mohar and co-teacher Shelley Durkin had about 15 of their students participate in the sidewalk project, each taking a small square in the logo. The students were participating in Pastels on 5th on Saturday in downtown Loveland. (Not Provided / Loveland Reporter-Herald Craig Young / Loveland Reporter-Herald)