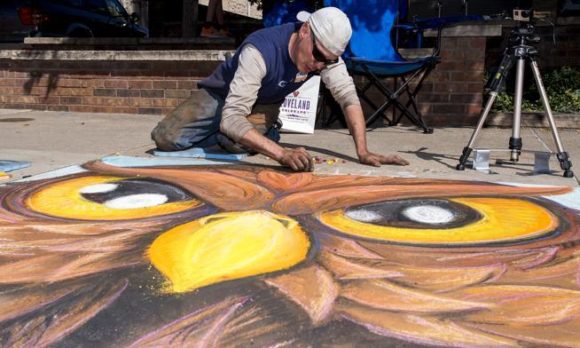 Loveland may be full of art, but the city’s sidewalks are one place that generally remain plain. Well, usually.

For one day in early September, that plainness goes out the window downtown as Fifth Street becomes a patchwork of performance artistry in chalk for the city’s annual Pastels on Fifth chalk festival.

Now in its eighth year, Pastels on Fifth will bring more than 150 artists to the area of Fifth Street adjacent to the Loveland Museum to create chalk masterpieces right on the sidewalk. The event raises money for the Loveland domestic violence victims organization Alternatives to Violence by selling sponsorships for each artist’s piece and charging festival attendees $1 for a chance to vote on the People’s Choice award for best piece.

Loveland artist Amanda Gress is one of the artists who will be hitting the paint to create a chalk art piece for this year’s event.

“I just think chalk art festivals like this are really interesting because you have professionals, students and amateurs all trying to contribute to a whole,” she said. “The whole thing ends up becoming almost like one picture or like a montage.”

Gress, who said she is contemplating whether to do a chalk picture of a succulent or a portrait for her piece, said the festival is also a gratifying experience for the participating artists because it gives them a chance to have their work seen by people who might not regularly seek out art.

“Not everyone wants to go into a stuffy gallery or museum,” Gress said. “This is a chance for the everyday person to see artists working right from the street and be part of watching them make a piece.”

This year’s festival will also provide its attendees with the chance to see one artist create a piece on a whole new surface: a car.

That vehicle is being provided by Loveland Ford, which has tasked one of its employees who is also an artist with painting the vehicle’s surface with chalkboard paint and then drawing a chalk image on top of it. The chalked-up car will be auctioned off with the proceeds going to Alternatives to Violence in October.

The festival will also offer a chance for local kids to try their hand at creating their own chalk art pieces in a children’s area where they will also be able to enjoy cupcakes and other activities. Visitors of all ages, meanwhile, will enjoy performances by six bands, food trucks and several art vendors.

Amanda Waddell, an event organizer, said this year’s event has already raised $41,000, surpassing the total from last year’s festival of $38,000. Still, she said organizers are hoping to bring in “a couple thousand more” from donations they will collect at the festival.

It will be money well-spent, Waddell said.

“Everybody knows somebody that has been affected by violence, and with how much Northern Colorado has been growing, this organization needs more resources,” she said. “It helps all of us by helping keep the community safe and Loveland on its feet.”

Posted in Pastels in the Media